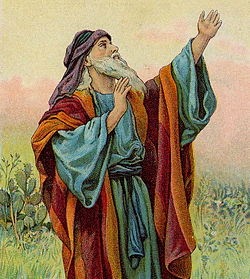 More elaborate examples are found throughout Isaiah, showing that the style was ancient. A sophisticated pattern is woven through the opening oracle of judgement, based on the fallen angels, the foundation myth of the Enoch tradition. The same myth appears in Psalm 82, so there is no doubt that it was part of temple tradition: the heavenly beings, 'elohim, were the sons of God Most High, sang the psalmist, but they rebelled. They had neither knowledge nor understanding, and would fall and die like mortals. Isaiah used these images in the opening oracle against the fallen and rebellious sons of God who had neither knowledge nor understanding (Isa. 1.3). Then the wordplay begins. 'The ox, šor, knows its owner, qoneh', is very similar in sound to 'the prince, śar, know his begetter', qoneh being the ancient title for El Elyon in Genesis 14.19. The ass, ḥamor, sounds like komer, priest, and 'ebus, crib, is like jebus, the ancient name for Jerusalem. Beneath the familiar text can be heard another message: 'The prince knows his father and the priest of Jerusalem his master.' The ideal is contrasted with the reality, and that is the point of the oracle. What follows is multiple wordplay: the prophet condemns a sinful (ḥote') nation, which sounds like a visionary (ḥozeh) nation. They are a people heavy with iniquity (kebed 'wn) or honoured with wealth (kebed 'wn) (wordplay found also in Hosea 12.9, English 12.8). They are the offspring/seed of evildoers (mere 'im) or from seers (mero 'im). They are corrupted (maśḥitim) sons or anointed (mešuḥim) sons.

The intended message is certainly lost in translation, as the either/or construct based on homophones does not carry the equivalency into the English language. Thus, the English reader would never catch that the condemnation of a sinful nation being the offspring of evildoers, could just as well be inferred that if they had been righteous, they would then be a visionary nation being the offspring of seers. Part of understanding Isaiah, I suppose, includes attempting to understand what is meant beyond the confines of the English language.
Posted by Tim