The Seal of Melchizedek as a Christological Symbol 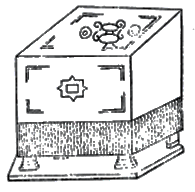 Altar in the Melchizedek and Abel Mosaic at St. Vitale, Ravenna, Italy1
As discussed in my previous posting, Alonzo Gaskill's article entitled, "The Seal of Melchizedek?" which was recently published in The Religious Educator, has inspired me to further research the historical significance of this enigmatic icon. Brother Gaskill focused much of his article on the eight-pointed star in terms of Christological symbolism. He identified several meaningful elements of the symbol, such as the gamma (or right angle), the square, the number eight, stars, and the eight-pointed star. It is the purpose of this post to expound on his commentary and analysis, as it relates to the elements of the eight-pointed star; whereas, discussion regarding the eight-pointed star itself will follow in a subsequent post.
Read more »
Posted by Tim No comments: