"Let us go up": Nephi's Literary Allusion to the Exodus and the Temple 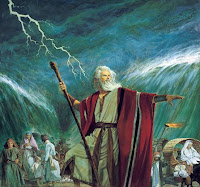 Several LDS authors have pointed out the prevalent usage of the Exodus motif in Book of Mormon texts. S. Kent Brown, for example, observed that "The memory of Israel's exodus from Egypt runs so deeply and clearly in the Book of Mormon that it has naturally drawn the attention of modern students."1 Joseph Spencer, citing George Tate, points out that the importance of this theme stands out, for example, when, "Alma draws not on the texts of Exodus, but on the tradition of the exodus--a tradition present in the Nephite consciousness long before Alma."2 This consciousness must have been inherited from their Israelite forebears, or possibly developed culturally through focused attention upon specific scriptures in the brass plates; or conversely, both factors could have affected this tradition to varying degrees at different periods in Nephite history. The fact that this emphasis exists, however, is worthy of noting. Jo Bailey Wells comments on the importance of this motif within the Hebrew Bible itself, which could speak to an inherited Nephite tradition:


"With regard to the rest of the Old Testament, the motifs of the book--of the exodus, the wilderness, of Sinai--are repeatedly echoed. In particular the escape from Egypt is viewed as the event of supreme religious significance. Even elsewhere in the Pentateuch it is no mere historical event of the past, but a permanent symbol that constantly imposes itself afresh on the collective memory. In the Psalms, in the historical books, and in the Prophets, the experience of the exodus is declared again and again--so that Amos, for example, can voice God saying to a generation at least five hundred years later, "I brought you up out of the land of Egypt" (Amos 2:10).3

A superficial understanding of the Bible emphasizes the New Testament at the expense of the Old Testament by simply discounting these scriptures as having been superseded. The notion that Christ changed the law to effectively relegate the Hebrew Bible as though it no longer had relevancy is to assert ignorance regarding the Savior's exegesis on Psalms, Isaiah, Deuteronomy, and other scriptures. While Christ's teachings certainly superseded Israelite liturgical practices and, in some cases, He provided a higher order of doctrines and principles, still His teachings brought to surface principles and doctrines in other cases that were embedded in the Torah and elsewhere. One such example, is His reference to loving one another: "thou shalt love thy neighbor as thyself" (Lev. 19:18). Writing on the significance of this Israelite teaching, Joel N. Lohr, explains what this meant in terms of "corporate responsibility":