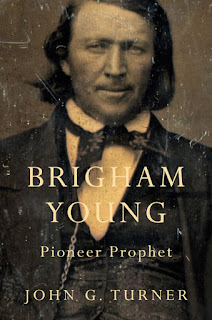 I suppose my frustration with this book thus far, is based on a couple of issues that I see as significant shortcomings. First, I am bothered with the labeling of this book as a biography, especially as a definitive biography, because it has yet to provide adequate biographical information. John Turner has provided a contextual landscape, but neglected to sufficiently delineate Brigham Young's portrait within the book's canvas, at least through the first fifty-four pages. Second, Turner's hostile bias towards Joseph Smith distracts from Brigham as the primary focus in this chapter. The author's inability to appreciate Joseph for his leadership and ability to inspire and attract disciples fatally flaws his ability to comprehend, or at least articulate, why Brigham was so devoted and such a strong disciple of the restorational prophet. Additionally, on a side note, I am confused as to why LDS reviewers are treating this book as favorably as they have been. While Turner's in depth research is apparent, his selective inclusion of  information leaves the contents materially deficient and he has created an imbalanced portrayal hardly acceptable under scholarly standards. All that I can conclude thus far, is that propaganda evolves and becomes more elaborate. I will further address each of these issues in detail below.

The late Peter G. Mode, formerly Assistant Professor of Church History in the Divinity School at the University of Chicago, opened his encyclopedic entry on Mormonism by introducing the Prophet Joseph Smith as being "of neurotic, superstitious parentage..."1  John G. Turner's introduction of Brigham Young's heritage is a bit more subtly stated, but ultimately mirrors Dr. Mode when noting that the Prophet's ancestors, "bequeathed to their descendants a robust belief in supernatural phenomena" (pg 10). This assertion follows shortly after discussing Brigham's great-grandparent's house as being haunted. Leading up to this sensationalistic portrayal of his ancestor's basis underlying their religiosity, Turner focuses on the Young family's perpetual state of poverty. All of this is preliminary, however, to his focus on their membership and participation in Methodism.