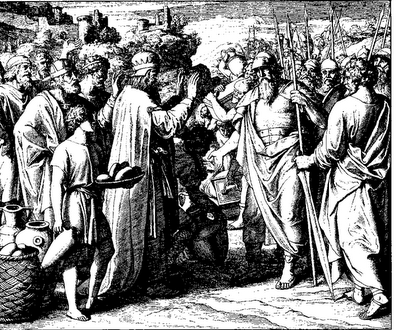 The Genesis Apocryphon was found in the caves of Qumran, and constitutes part of the Dead Sea Scrolls (this scroll is referenced as 1Q20).  This apocryphal book of scripture stands apart from other texts from Qumran, as Joseph Fitzmyer notes, "there is nothing in this text that clearly links it with any of the known beliefs or customs of the Qumran sect.  There is practically no Essene theology in this work, and it is difficult to see what exegetical or doctrinal meditations were at work in the composition of this text."2  While this would seem to indicate a text pre-dating the Qumran community, nevertheless, Fitzmyer dates the language of the text to the 1st Century BCE.3  Other scholars have had differing opinions on the dating of the text.4  At any rate, the content itself is similar to Genesis with degrees of variation.  Avigad and Yadin noted that "it is actually a sort of apocryphal version of stories from Genesis, faithful, for the most part, to the order of the chapters in Scripture.  Some chapters of the scroll begin and end precisely as the comparable chapters of Genesis do, though the narrative in the scroll is in large part couched in the first person."5  Others have noted that with the additions made to the biblical text, it may be more of a commentary "in the manner of the Targumim."6
Read more »
Posted by Tim No comments: