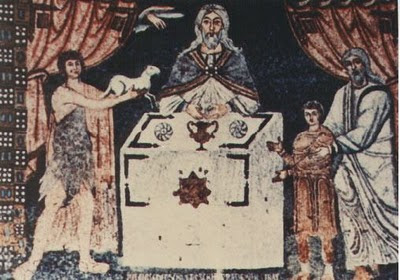 This mosaic is particularly interesting since the imagery so strongly depicts symbols of Christ in the temple setting. Righteous Abel is shown offering a lamb at the altar, a similitude of Christ who is the "Lamb of God."3 Abraham offers Isaac at the altar, illustrating his willing obedience to keep God's commandment in sacrificing his only son.  Isaac symbolizes Christ as the sacrifice of the Only Begotten Son, and Abraham symbolizes God the Father in sacrificing his only son.4  Melchizedek stands at the head of the altar with bread and wine, foreshadowing the institution of the sacrament as taught by Christ to his disciples, who were to partake of the sacraments in remembrance of the Lord's body and blood which was offered in the great atoning sacrifice.5  In addition, Melchizedek himself was a significant symbol of Christ as the High Priest and King, this however, will be treated more fully in another post.

This gathered offering is taking place at the altar before the veil of the temple, where the curtains are parted and the hand of God reaches through. The open veil illustrates the fulfillment of Christ's atonement wherein the temple veil was rent in twain from top to bottom so that all can potentially come unto God and enter into the holy of holies.6  Additionally, the rent veil "figured also the pierced body of the Saviour..."7  A number of other symbols of Christ exist within the mural, however, it is not within the scope of this study to delve into every detail.  Amidst all of these symbols, however, the "so-called seal of Melchizedek" is at the forefront.  After noting the commonalities between each of these symbols, it can hardly be doubted whether this "seal" also has a Christmatic connection.

And Noe, and Nir were tempted with a great fear, for the child was complete in its body, like one of three years old; and spake with its lips, and blessed the Lord. And Noe, and Nir gazed upon it; and lo! the seal of the priesthood was on its breast, and it was glorious in countenance.8

While the validity of this apocryphal text cannot be entirely measured, it is interesting to note that the seal is directly linked to the priesthood.  In the scriptures, Melchizedek is refered to as a High Priest, which is an office belonging to the highest order of the priesthood.  Paul declared that Jesus was "made an high priest forever after the order of Melchisedec," and Alma, the son of Alma, stated that Melchizedek was a High Priest after the Order of the Son.  This order, according to latter-day revelation was called the "Melchizedek Priesthood," because "Melchizedek was such a great high priest.  Before his day it was called the Holy Priesthood, after the Order of the Son of God."9   In the Joseph Smith Translation, the scriptures are given added clarity in that this order of priesthood, rather than Melchizedek, was "without father, without mother, without descent, having neither beginning of days, nor end of life."  It is additionally stated that, "all those who are ordained unto this priesthood are made like unto the Son  of God, abiding a priest continually."10  As Christ is eternal, so is this priesthood, which is after His Order.  It appears reasonable that there is a distinct connection between Melchizedek's seal of the priesthood, and the Holy Priesthood after the Order of the Son. With this connection we can better understand Alma's teachings (which directly precedes his discourse on Melchizedek), regarding the ordination to the holy priesthood being a type of Christ, as Christ was foreordained to be from Eternity to all Eternity, so were those priests after His Order.11

Another mosaic shows Melchizedek and Abel in an outdoor setting.  This mosaic is from a different Basilica in Ravenna, Italy.  In this case, the hand of God reaches down from the heavens, rather than through the veil.  The presence of the altar of God lends the scenario to being another temple motif. 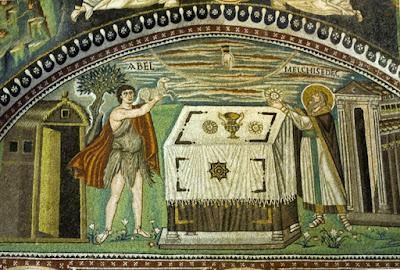 In this image the lamb and the sacramental offerings are present.  We can better see the seal of Melchizedek in this image, and note that two concentric circles are included within the interlocked squares.  It is provided below for a closer (although fuzzier) look:

Another version of the eight-pointed star associated with Melchizedek appears in a Masonic work in 1905, based on the "47th Problem of Euclid."  Euclid of Alexandria is commonly known as the "Father of Geometry." Around 300 B.C., he produced a thirteen volume work, entitled Elements, which became the standard mathematical textbook for approximately two-thousand years.  These volumes included a collection of "geometry, proportion, and number theory."  The 47th problem was extracted from Book 1 of Euclid's tome.12 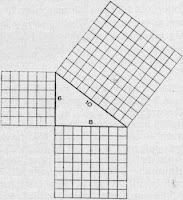 The 47th proposition postulates that "in a right-angled triangle the square on the side subtending the right-angle is equal to the (sum of the) squares on the sides surrounding the right-angle." For anybody who has taken a geometry course, this should seem familiar since it is equivalent to the pythagorean theorem, which is illustrated by the equation a2 + b2 = c2.  "Most of the theorems appearing in the Elements were not discovered by Euclid himself, but were the work of earlier Greek mathematicians such as Pythagoras (and his school), Hippocrates of Chios, Theaetetus of Athens, and Eudoxus of Cnidos."13

Freemasons have made particular mention of Euclid's 47th problem in numerous publications, including its connection with Pythagoras, the Egyptians, and its symbol of morality, representing "the ideal of perfection."14  It has been noted as one of the emblems of the Masonic third degree, and serves to teach Masons to be "lovers of the arts and sciences."15  Euclidean Geometry is recognized by Masons because it has been thought that this "system embraces the Masonic philosophy expressed in mathematical terms."16 This is explained by noting that "the geometrical constructions employed in the Elements are restricted to those which can be achieved using a straght-rule and a compass."17 Obviously, the compass and square (straight-rule) figure predominantly in Freemasonry.

In 1905, Henry Pelham Holmes Bromwell published his Restorations of Masonic Geometry and Symbolry Being a Dissertation on the Lost Knowledges of the Lodge, wherein this equation from Euclidean geometry was extrapolated to construct an eight-pointed star.  As the geometric problem illustrates above, the triangle is made up of three angles, one angle being 90 degrees and the other two are both 45 degrees. By eliminating the 90 degree angle, and inserting in it's place another 45 degree angle (all lines being equal in length), an eight-pointed star is created that continues infinitely.  This star, Bromwell explains, is identified as the "Signet of Melchizedek."18 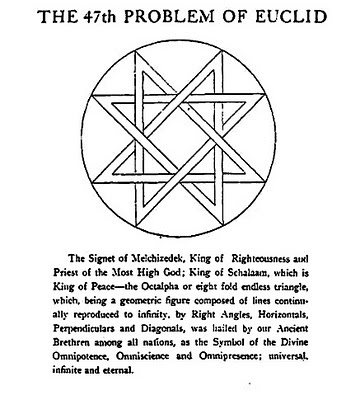 Bromwell gives us some meaning as to its significance, but doesn't elaborate on its connection specifically with Melchizedek. The famous Masonic encyclopedia compiled by Albert Gallatin Mackey states that "in Masonry, Melchizedek is connected with the order or degree of High Priesthood, and some of the high degrees...[and] was the founder of an Order of Priesthood."19  Perhaps H.P.H. Bromwell was familiar with the eight-pointed star constructed by the two interlocking squares, and simply redesigned the symbol by incorporating Euclidean geometry to connect Melchizedek into this ideal of perfection.  In any case, it is interesting that another version of the eight-pointed star has a direct connection with Melchizedek, and in this case also, Masonry connects him with the Order or High Priesthood of Melchizedek.

All of this leaves us curious.  What further meaning do these symbols have?  Are they recorded in ancient history?  Why is there no mention of this iconography within the scriptures?  My discussion of the subject at this point is far from conclusive, but rather, I hope it opens a door for further research.  Symbols are significant within Mormon culture and always carry theological implications. Any study of the connection of the eight-pointed star and its connection with Melchizedek can only garner further light and educate us in relation to this interesting curiosity.  A historical study regarding the documentation of this symbol in art or writing may prove fruitful since it appears to have survived through the ages. It would make for an interesting study if the artist who created these 6th-7th century mosaics had documented anything in connection with these motifs (it appears to be the same artist in either case).  What particular meaning did he attach to the seal?  Likewise, an investigation into the existence of other known illustrations or descriptions of the seal from different time periods may provide further enlightenment.

Lastly, there seems to be a connection between the Star of David (or Seal of Solomon) with Melchizedek. At this point, I have been unable to find anything substantial in connecting the two.  Perhaps a further study of this connection may prove fruitful as well.

From a Latter-day Saint perspective, it is interesting to note that Melchizedek is seen in a temple setting as a type of Christ, and that he is identified as a High Priest holding the Priesthood after the Order of the Son of God.  It is no wonder that his seal is represented on Latter-day temples where the fullness of the Melchizedek priesthood ordinances are administered for those who are willing to take upon them the name of Christ and keep His commandments.20  Joseph Smith taught that "if a man gets a fullness of the priesthood of God he has to get it in the same way that Jesus Christ obtained it, and that was by keeping all the commandments and obeying all the ordinances of the house of the Lord."21  In the temple, all of these elements come together wherein the Holy Priesthood can seal us to eternal life and we become one with Him who is from all Eternity to all Eternity.