Hugh Nibley on the Relativity of Scriptural Events 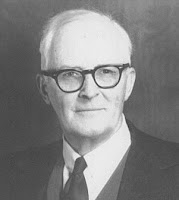 “The story of the Garden of Eden and the flood has always furnished unbelievers with the best ammunition against believers because they are the easiest to visualize, to popularize, and to satirize of any Bible accounts,” he said. But apparent strange and extravagant phenomena described in the scriptures are often correct descriptions of what would have appeared to a person in a particular situation such “as we have never been in.”

“To describe what he sees to people who have never seen anything like it, the prophet must reach for metaphors and similes. They are reporting, as best they can, what they have seen from a vantage point on which we have never stood.”


“...So it was with Noah and the ark. The flood, as described, is what he saw of it. The anthropic cosmological principle specifies that what an observer is able to see of the universe actually makes a difference in the real nature of that universe. It makes the observer an indispensable part of the macrophysical world. Nowhere is the principle of relativity more clearly proclaimed than in the cosmology of the Books of Moses and Abraham.”