His article has inspired me to research the matter further. Consequently, research on this topic for the last couple months has resulted in a response that is too large for a single post, and I have neglected my goal for monthly posting.  Accordingly, I will subsequently be posting my research in segments.  The purpose of this particular post is to explore some assertions made by Brother Gaskill in relation to statements attributed to Michael P. Lyon, an artist well known for his illustrations in Hugh Nibley's Collected Works, and other publications.  Brother Lyon illustrated a mosaic of Melchizedek at an altar, with Abraham and Isaac, and Abel, on either side of the altar, and the seal on the forefront of the altar cloth.  The mosaic is found in the Basilica of St. Apollinaire in Classe at Ravenna, Italy. Lyon's depiction was included in Nibley's book, Temple and Cosmos, regarding discussion on gammadia.2  Another illustration of this mosaic, published in Germany in 1901, is included below. 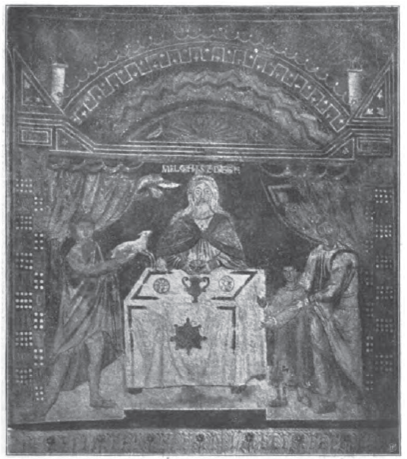 Mosaic in S. Apollinare in Classe3

I contacted Brother Lyon with some questions, to which he provided me with responses. He also courteously provided me with permission to share this information.  The following conversation is from my email to Brother Lyon on February 3, 2011, and his response on March 21, 2011.  I have arranged the correspondence in a question-answer format for convenience and additional discussion outside of this topic has been excluded.  My questions are in black font, and his responses are in blue font.

[Brother Gaskill] mentions that you provided the caption in Temple and Cosmos under the illustration of the Mosaic from St. Apollinare in Classe, regarding gammadia and the "so-called seal of Melchizedek." Can you confirm whether this is correct?  There is mention in Brother Gaskill's article of how you and Brother Nibley discussed illustrations, or captions pertaining thereto - can you recall the discussion relating to this particular illustration and caption?

In regards to captions, I wrote most of them because Bro. Nibley asked me to, since I was more familiar with the specific image, but I always made sure that he read them. He made very few changes, but I seem to remember that he inserted "so-called" before seal of Melchizedek. Our discussion centered on the fact that there is no contemporary identification of the intertwined squares as belonging to Melchizedek. Both of us had seen numerous examples in Byzantine art that had no connection to that specific  prophet. My best guess is that sometime after the creation of the mosaics, a later scholar connected the pattern on the altar cloth with the name inscribed above in the two examples and started the tradition that it was the Seal of Melchizedek.

He mentioned that you thought you had once seen this emblem on a book of Catholic symbolism. Do you recall if the book actually associated the emblem with Melchizedek? Do you have any recollection what the name of this book was? Brother Gaskill mentioned that you had been unable to locate this book. I'm hoping that circumstances have changed. Brother Gaskill also indicates that you "doubted the legitimacy of the name or title." Can you elaborate as to why?

I haven't been able to find the 19th century book I remembered seeing on the shelf years ago, so I'm grateful to hear of the book you found [see below]. I have looked in a number of Catholic dictionaries under Melchizedek and none of them associate the pattern with him. The pattern appears in architecture, paintings, textiles and even a bookbinding. I have the references to a number of them if you're interested. It is a pleasing geometrical pattern, like the pentagram or hexagram but it has no ancient connections to Melchizedek just as the others were not connected to David or Solomon.

That being said, there is nothing wrong for us to identify it with Melchizedek today just as the other symbols have became linked to David and Solomon over the years and are now part of the symbolic language of the world. But we need to be careful when talking about them to remind ourselves that this is just one aspect of their possible meanings. In India they were using the Sri Yantra, interlocked triangles, long before they were associated with Judaism in the west.

Brother Gaskill mentions that you thought the eight-pointed star might be a simple form of a rosette. After doing some research, I believe I have found evidence indicating that the mosaic design is most likely correct as it is (rather than being a rosette), since there are textiles almost identical to the front of the altar cloth (with the "seal" and the gammadia, and a few authors have noted that the mosaic derives from these textiles. I'm not sure whether you were asserting that it was a rosette, or simply providing an alternative suggestion. However, if you believe it be a rosette, can you provide me with any references to assist in my research?

Also a note on the term rosette. It can mean a radially symmetrical design, not just something botanical. Depending on their ornamentation, regular polygons i.e. pentagons, hexagons and octagons, can be considered rosettes. The San Vitale mosaic was heavily damaged at some point and the original interlocked squares on the altar cloth were restored based on the parallel example at S. Apollinare in Classe.

Are you aware of any General Authorities identification of this symbol as the Seal of Melchizedek, as is commonly related in stories regarding the design of the San Diego temple? From my visit to the SD temple a few years back, one of the temple workers told me President Faust identified the symbol as the Seal of Melchizedek. I don't know if this is hearsay, or if there is some legitimacy to stories like these.

In regards to LDS comments, the only connection I can recall is a meeting we had many years ago at FARMS with a group of men from the Temples and Special Projects department. Among many items, we talked about the Seal of Melchizedek and I shared my opinion of the matter. I think they had seen the illustrations in Temple and Cosmos and knew of the term. I hope this helps.

I have found (as posted in my article on the Seal of Melchizedek) an eight-pointed star denoted as "the Signet of Melchizedek" as published in 1905, in Henry P.H. Bromwell's book, Restoration of Masonic Geometry and Symbolry Being a Dissertation on the Lost Knowledges of the Lodge (pg 170). Is this, by chance, the same book that you might be referring to (as mentioned by Brother Gaskill)?

[Based on the information provided above, Brother Lyon was unfamiliar with Bromwell's book.]

Anyways, I'm hoping that you could provide me with an explanation detailing your thoughts on the "so-called Seal of Melchizedek," and any sources that you might be able to refer me. I would be especially appreciative.

[The information above answers this last question.  Brother Lyon also mentioned:] I  would like to know the earliest mention of the Seal of Melchizedek when somebody comes across it. As I recall, the reference to him was dropped from the mass fairly early. His depictions in medieval art are very rare, so its not surprising that we're having difficulty tracking this down.