I have to admit, the first time I read Hugh Nibley assert that banks were derivative from ancient temples I thought he was really stretching. The striking contrast that he provided between the two was compelling and intriguing, but it also seemed too contrived. That was my mistake.

The following two Nibley quotations seem to be popular online:

"In our day, as in various other times in history, the sanctity and the authority of the temple have been preempted in the religion of mammon, for example. Our banks are designed after the manner of ancient temples, with imposing fronts, ceremonial gates and courts, the onyx, the marble, the bronze--all are the substance of ancient temples. The sacred hush that prevails, the air of propriety, decorum, and dedication; the pious inscriptions on Zion's Bank's walls are quotations from Brigham Young (the one man who really had it in for business). The massive vault door, through which only the initiated may pass, gleams chastely in immaculate metal. The symbol makes the reality of all that is safe and secure--that is, the Holy of Holies. For where your treasure is, there will your heart be also. This is the Lord speaking. We declare that our trust is in God, and we give ourselves away by stamping that declaration where it belongs--on our coins and bills."1

"To these types of evidence must be added the most impressive--and neglected--of all, those "spin-offs" of the temple which have long attracted my interest as such. The "spin-offs" are things not essential to the temple's form and function, but the inevitable products of its existence. To begin with, there was an urgent need of accommodations for all those pilgrims from far away; hence those booths, memorialized in the Hebrew Festival of Booths, remains or records of which we find in many parts of the world. Our words hotel and hospital go back to those charitable organizations which took care of sick and weary pilgrims to the holy places--the Hospitalers of the Crusades offered hospitality also under the name of Templars, for it was travelers to the temple that they were aiding and protecting. Since all who came had to bring food for the festival as well as animals for offerings and sacrifice, those who lived a great distance (more than three days away in Israel; see Deuteronomy 14:22-27; 26:12-14), finding the transport of such items of great difficulty, could instead bring the money value of those offerings to the Temple, which thus became a place of exchange and banking--our word money comes from the temple of Juno Moneta, the holy center of the Roman world. Along with that, the bringing of a variety of different goods and products from widely separated places inevitably gave rise to a lively barter and exchange of goods, and everywhere a fixture of the great year rites was the yearly fair, the market-booths of the merchants added to those of the visiting pilgrims, with artisans, performers, and mountebanks, also displaying their wares."2

His explanation makes sense, but when I first read these assertions I simply thought that the exchange and banking system described were simply a small-scale adoption of a practice that surely existed on a much larger scale. Nibley, however, was simply highlighting information that was well known (here and here). I just stumbled upon an interesting book by Marty Stevens published in 2006 by Baker Academic that seems to corroborate these notions and explores them in greater detail with an expanded scope. "In this groundbreaking study of the economic functions of the Jerusalem temple, Marty E. Stevens...demonstrates that the temple acted as the central bank, internal revenue collector, source of loans, and even debt collector for ancient Israel." Probably worth checking out: 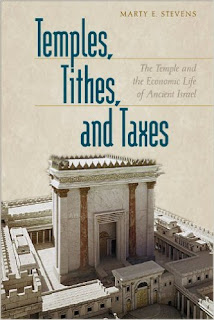