On another side note, among the many individuals to whom Elder Holland expresses gratitude in assisting in this work, he notes that Professor Donald W. Parry was of "invaluable assistance on the chapter on Isaiah..."  Brother Parry co-authored Understanding Isaiah, published by Deseret Book in 1998, and Isaiah in the Book of Mormon, published by FARMS in 1998.  Additionally, Elder Holland thanks Edward Brandt for his contribution on the background of the law of Moses. Brother Brandt has an article in the 1989 Sperry Symposium on the Old Testament (A Witness of Jesus Christ), entitled "The Law of Moses and the Law of Christ." If Elder Holland felt that Brother Parry and Brother Brandt had something worth contributing that complemented his own studies - then perhaps their writings should attract our interest as well.

With respect to the book itself and the goal which it set out to achieve, I find this book highly recommendable. It has profound insights and an excellent organization of the atonement teachings throughout the Book of Mormon. The following quotations (mixed with some interjections) and observations seemed worthy of preserving:


Elder Holland seems to agree mostly with #6 (I agree), although I personally also like #'s 4 & 5. They seem to be listed in order of strength from weakest to strongest.

On pages 51-52, Elder Holland points out the significance of a verse from Nephi's great discourse found at the end of 2 Nephi on the "Doctrine of Christ." 2 Nephi 31:11: "and the Father said: Repent ye, repent ye, and be baptized in the name of my son." We seldom hear the Father, other than in declaring/announcing the Son, but here the Father declares repentance, a role typically carried out by the Son (in carrying out the will of the Father no less).

"It has been noted that, for the most part, the voice of the Father has usually been limited in scripture to introducing his Beloved Son and expressing his pleasure in him.  But this verse [2 Nephi 31:11] from the stylus of Nephi is revealing in that it gives broader utterance to the Father than that which the biblical canon usually records." (pg 51)

"Preparatory faith is formed by experiences in the past--by the known, which provides a basis for belief.  But redemptive faith must often be exercised toward experiences in the future--the unknown, which provides an opportunity for the miraculous. Exacting faith, mountain-moving faith, faith like that of the brother of Jared, precedes the miracle and the knowledge. He had to believe before God spoke. He had to act before the ability to complete that action was apparent. He had to commit to the complete experience in advance of even the first segment of its realization. Faith is to agree unconditionally--and in advance--to whatever conditions God may require in both the near and distant future." - pg 18-19

Elder Holland brings a temple-related perspective to understanding the Small Plates of Nephi. Early in his book he alludes to the famous quotation from Brigham Young regarding the purpose and meaning of the endowment (Journal of Discourses, 2:31): 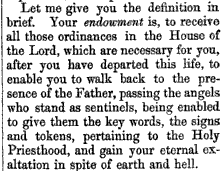 Elder Holland's quotation takes this theme and applies it to the Book of Mormon:

"Standing like sentinels at the gate of the book, Nephi, Jacob, and Isaiah admit us into the scriptural presence of the Lord." (pg 36)

This, to me, is another example of the articulately insightful perspective shared with us by one of the Lord's inspired disciples.

"Faith in the Lord Jesus Christ ultimately means believing him, trusting him, obeying him, following him. "Follow me," the voice of Christ commands us through his declaration to Nephi, "and do the things which ye have seen me do." That may be the simplest, clearest, gospel call ever given--the essence of the Christian life expressed in its most understandable terms." (pg 50)

We usually associate cleansing or remission of our sins through baptism in water. Elder Holland points out, after reading 2 Nephi 31:13, that "the important doctrine proclaimed here is that the ultimate inward remission of sin comes from the cleansing flame of the Holy Spirit after the outward, symbolic cleansing of baptism by water has been administered." (pg 53)

"Of course, as noted by Isaiah, Christ is not only a mediator but also a judge. It is in that role of judge that we may find even greater meaning in Abinadi's repeated expression that "God himself" will come down to redeem his people. It is as if the judge in the courtroom in heaven, unwilling to ask anyone but himself to bear the burdens of the guilty people standing in the dock, takes off his judicial robes and comes down to earth to bear their stripes personally. Christ as merciful judge is as beautiful and wonderful a concept as that of Christ as counselor, mediator, and advocate." (pg 81)

"In his childhood and youthful years with Joseph and Mary, at which time he was only a plant, he was to anchor himself and become a mighty root; then he would grow to become the Tree of Life.  (The tree of life as a symbol includes the tree on which he would be slain for the sins of the world)." (pg 90)

Elder Holland cites 1 Nephi 11:21-22, and Acts 5:30 with respect to the connection between the Tree of Life and the Cross.

"He who most deserved peace and was the Prince of Peace had peace taken from him. He who deserved no rebuke, let alone physical abuse, went under the lash that his taking of such stripes might spare us such pain if only we would repent. The total cost of such combined spiritual and physical suffering is incalculable. Yet the iniquities, including the sorrows and sadness, of every mortal being who ever has lived or will live in this world were laid across one lonely set of shoulders. In the most magnificent display of strength ever known in the world of human endeavor, they were carried until full payment had been made." (pg 92)

"Samuel prophesied that at the time of Christ's birth a new star would appear in the heavens over the New World, just as it would in the Old, but that there would be additional signs and wonders for these Nephites. "There shall be great lights in heaven," Samuel said, "insomuch that in the night before he cometh there shall be no darkness, insomuch that it shall appear unto man as if it was day." This would be so vivid, Samuel promised, that the people would watch the rising and the setting of the sun but "the night [would] not be darkened," so that a day, a night, and a second day would be uninterrupted by any dimming of the light. This was to be a principal manifestation in a time of "many signs and wonders in heaven" that the Light of the World, the Bright and Morning Star, he whose glory is above the brightness of the sun, had been born into mortality." (pg 131-132)

"Worse than not being "reasonable" (which, by definition, miracles never can be), the prophecy of Christ's coming struck at an even more painful part of the Nephite psyche--their vanity. "This is a wicked tradition," they said, "which has been handed down unto us by our fathers, to cause us that we should believe in some great and marvelous thing which should come to pass, but not among us, but in a land which is far distant, a land which we know not; therefore they can keep us in ignorance for we cannot witness with our own eyes that they are true."

"This was all a plot, a scheme by a group of unpatriotic renegades who "may have guessed right" on a few miracles, they said. These prophetic enemies of reason and local pride wanted to work "some great mystery" that they could not understand, that would keep them in bondage and ignorance and dependence upon them forever, they said. "And many more things did the people imagine up in their hearts, which were foolish and vain."

"Imaginations? Foolishness? Vanity? And so the pre-advent of Christ closes in the Book of Mormon with the realization of Father Lehi's dream that began it. In an endless sequence of prophetic declarations of Christ--declarations of "all the holy prophets" for "a great many thousand years before his coming"--the Book of Mormon makes the repeated and divine assertion that Jesus is the Christ, that he is the way of salvation and no other, that his gospel "is the most desirable above all things...yea, and the most joyous to the soul." "We knew of Christ," all these ancient prophets said, and yet, from 600 B.C. and Lehi's flight from Jerusalem to the very eve of the birth of Christ 406 pages later, the challenge to safety and salvation, to faith and righteousness and the fruit of the tree of life is the same:

"The multitude of the earth was gathered together; and I beheld that they were in a large and spacious building....And the angel of the Lord spake unto me again, saying: Behold the world and the wisdom thereof....I saw and bear record, that the great spacious building was the pride of the world[,]...vain imaginations and the pride of the children of men." (pgs 133-134)
Posted by Tim