Disclaimer: Hugh Nibley, in writing his book, The Message of the Joseph Smith Papyri: An Egyptian Endowment, prefaced the content by stating that, "The whole purpose of this book is to compare two scenarios, the Egyptian and the Mormon; but the writer has been careful throughout to describe and discuss only one of them, preserving complete silence on the other. Though often sorely tempted to point out some really stunning parallels between the two disciplines, he has been restrained both by the admonition of the prophets and the consideration that what is glaringly obvious to him hardly needs to be called to the attention of any adult practicing Latter-day Saint..."1 A similar situation exists here, with respect to early Christian canonical and pseudepigraphical literature.

The Levitical priesthood allowed for the High Priest, as the sole representative of Israel, to pass through the veil into the Holy of Holies one time a year on the Day of Atonement (Hebrews 9:1-7). When the veil was "rent in twain" during the crucifixion of Christ, entrance to the Holy of Holies became available to all who were worthy to enter the temple, and more specifically, to those who were worthy to enter the presence of the Lord.2 Years ago, I first read Hugh Nibley's, Temple and Cosmos. There is plenty to glean from this tome, but there is one line cut from the text into my mind that has drawn the curtains back a little to shed light on an enigmatic subject. In discussing the ancient significance of the temple veil he notes that those who passed through the veil were "in a world surrounded by light." Nibley then quotes Marc Philonenko, who drew an interesting connection between the temple veil and temple clothing.3 Before quoting Nibley's translation of Philonenko, however, it would be well to understand the context of the subject that Philonenko was discussing.


The Testament of Levi, a pseudepigraphical book within the Testaments of the Twelve Patriarchs, is considered by most scholars to be a Christian document that draws upon Jewish sources.4 The tenth paragraph of this text includes Levi's admonition to his posterity to observe his commandments and he predicts the consequences for not doing so. Prefacing this admonition, however, Levi relates a vision wherein seven men in white clothing prepare him to be a priest by clothing him in the "vestments of the priesthood, the crown of righteousness, the oracle of understanding, the robe of truth, the breastplate of faith, the miter for the head, and the apron for prophetic power," and is anointed with holy oil and washed with pure water:5

And now, my children, observe the things which I commanded you, since what I heard from my ancestors I have told to you. See, I am free of responsibility for your impiety or for any transgression which you may commit until the consummation of the ages, [against Christ, the Savior of the world] in leading Israel astray and in fomenting in it great evils against the Lord. And you shall act lawlessly in Israel, with the result that Jerusalem cannot bear the presence of your wickedness, but the curtain of the Temple will be torn, so that it will no longer conceal your shameful behavior. You shall be scattered as captives among the nations, where you will be a disgrace and a curse. For the house which the Lord shall choose shall be called Jerusalem, as the book of Enoch the Righteous maintains.6

Specifically commenting on the idea that their wickedness would result in the curtain of the Temple being torn, "so that it will no longer conceal your shameful behavior," Levi (or the pseudepigraphical writer) makes a direct connection with the priestly clothing and the temple veil. Nibley, directly quoting Philonenko, observes that this "introduces us into a world of the most mystifying speculation: the Temple is here considered as a person and the veil of the temple as a garment that is worn, as a personification of the sanctuary itself."7 H.C. Kee similarly sees this statement as particularly unusual: "The figure of speech here describing the temple veil as covering Israel's shame is awkward and may have been altered by a Christian editor from an original reference to "garment." That would be consonant with the picture of God's judgment in Hos 2:9-10, which may provide the background for the imagery of this passage in TLevi."8 Biblical scholars see this statement in Levi as a Christian interpolation, with the torn "curtain of the Temple" described by Levi as directly relating to the 'temple veil' being rent in twain, as stated in Matthew 27:51 (also, Mark 15:38; Luke 23:45).


If the correlation between Levi and Matthew is appropriately warranted, which it seems to be, then David deSilva makes an interesting point that provides corroboration to Philonenko's assertion. Matthew uses the Greek katapetasma for temple 'veil', whereas, Levi uses endyma, for the temple 'curtain,' or, "garment of the temple."9 This provides a literary allusion between the temple veil and the physical garment or priestly clothing that was worn. It should be also noted that there is a lexical difference between 'garment' used in the New Testament, such as the instance of the lady touching the hem of Jesus' 'garment' (himation), and the 'garment' (endyma) that was "white as snow," worn by the angel of the Lord whose "countenance was like lightning" (Matthew 28:3). Not only does Levi's posterity defile their own garments, their wickedness would also defile the temple.


This train of thought is explored by Jacob Milgrom, who summarizes that "the priestly writers would claim that sin may not leave its mark on the face of the sinner, but it is certain to mark the face of the sanctuary, and unless it is quickly expunged God's presence will depart. In truth, this teaching is not a startling innovation; it is only an extension of the doctrine of collective responsibility, a doctrine, which, all concur, is basic to the priestly theology. It is only natural that they would regard the sanctuary of which they were the stewards as the spiritual barometer to measure and explain God's behavior to his people." Accordingly, with this premise accepted, "They knew full well that the prophet was justified in protesting "Why does the way of the wicked prosper?" (Jeremiah 12:1), and they provided their answer: the sinner may be unscarred by his evil, but the sanctuary bears the scars, and, with its destruction, he too will meet his doom."10


Based on the charge that Levi's posterity would defile themselves and, to some extent, be responsible for the rending of the temple veil, the curious fact exists that the Apostles continued to worship in the temple following the resurrection of Christ (Luke 24:49-53). Additionally, the temple continued to play a prominent role throughout the Apostolic ministry until it was destroyed in 70 A.D.11 If the Levite entrance into the Holy of Holies was now unrestricted to all saints (Hebrews 10:19-21), the question of the role of the Levitical priest becomes an awkward dilemma. To the degree that Levi's Testament is reliable, the Levite priests were defiled and their role was no longer integral to temple worship after the tearing of the temple curtain, especially with animal sacrifice no longer considered necessary (Hebrews 9); hence, Paul's exposition on the Melchizedek priesthood superseding the Levitical priesthood (Hebrews 7). With the ending of animal sacrifices, there is a change in ordinances, and of necessity, a change in priesthood (Hebrews 7:12).12 The temple was to still play a role following the rending of the temple veil, and entrance to the Holy of Holies was still central to that role, as illustrated in Paul's encouragement to have boldness (parrēsia) in entering the holiest place (Hebrews 10:19).


Throughout the Epistle to the Hebrews, reference to Christ as the new temple is unmistakable.13 However, the physical temple, as already noted, continued to play a role in the lives of the saints, and Paul also teaches that the saints' own bodies are to be considered temples as well. "Know ye not that ye are the temple of God, and that the Spirit of God dwelleth in you?" (1 Cor. 3:16-17; 6:19). Accordingly, Marc Philonenko's assertion that there is a mystifying correlation between the temple veil and the temple garment, becomes even more intriguing when considering that Christ's flesh is also symbolized by the torn veil (Hebrews 10:20). The personification of the temple alludes to the idea that the priest symbolically wore the temple veil, and that these priestly garments/veil symbolized Christ's body. Eugene Seaich explores the idea of Christ's wounded body being taken upon by His disciples:

Based, however, on passages such as Gal. 6:17 ("From henceforth let no man trouble me, for I bear in my body the marks of the Lord Jesus"), and 2 Cor. 4:10 ("Always bearing about in the body the dying of the Lord Jesus"), the symbol of the Cross was changed in certain traditions to the stigmata of the nails in the palms of the hands and the feet. Thus we encounter throughout medieval art and mysticism the signs of the "Five Sacred Wounds" in the actual flesh of believers....This tradition obviously goes back to the ancient belief that the initiate takes the marks of Christ's suffering upon himself. (Gal. 2:20: "I am crucified with Christ!")14


While the declaration from Paul in Galatians 6:17 is that his body bore the marks of the Savior, what is not addressed in the above quotation is the idea of Paul's comments being metaphorical. According to the author of Hebrews, the veil represented Christ's body, and if Levi's personification of the temple was understood and accepted by early Christians, then wearing the priestly garments symbolized the veil, which in turn, symbolized Christ's crucified body. Wearing the veil further symbolizes Paul's teachings that the holy of holies was not restricted to Levites and that the saints should take boldness in entering into the holiest place. As Paul instructs the saints that their bodies are temples, the symbolic wearing of the veil made each saint a receptacle for holiness as well, and allowed for personal entrance into the divine presence.15

The connection between the temple veil and priestly clothing was indeed recognized by early Christians and has been illustrated in various murals and mosaics. Nibley discusses the gamma (Γ) in particular, in his Temple and Cosmos (citing Yigael Yadin and gnostic literature):

...in many of the famous mosaics in Rome, Ravenna, and Naples, especially from the fifth century A.D. and later [but also earlier], one can see that all the mantles of the biblical figures are depicted with a single pattern similar to the Greek letter gamma - a little more like a right angle - a square. The most famous examples come from the fifth century, from Ravenna. The pattern is on the edges of the robe, but it is quite common. There are many examples of it in the earliest Christian life, but not later, because by then they have been transferred to the altar cloth. Originally they belonged to the veil of the temple.16

An example of some mosaics that Yadin refers to are provided below: 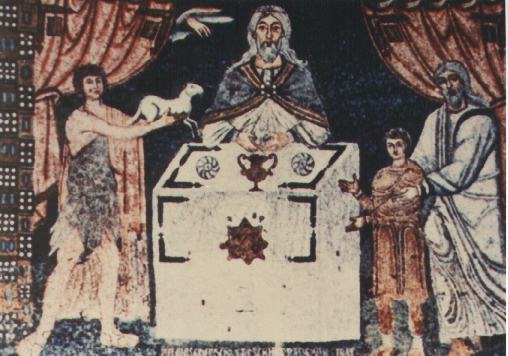 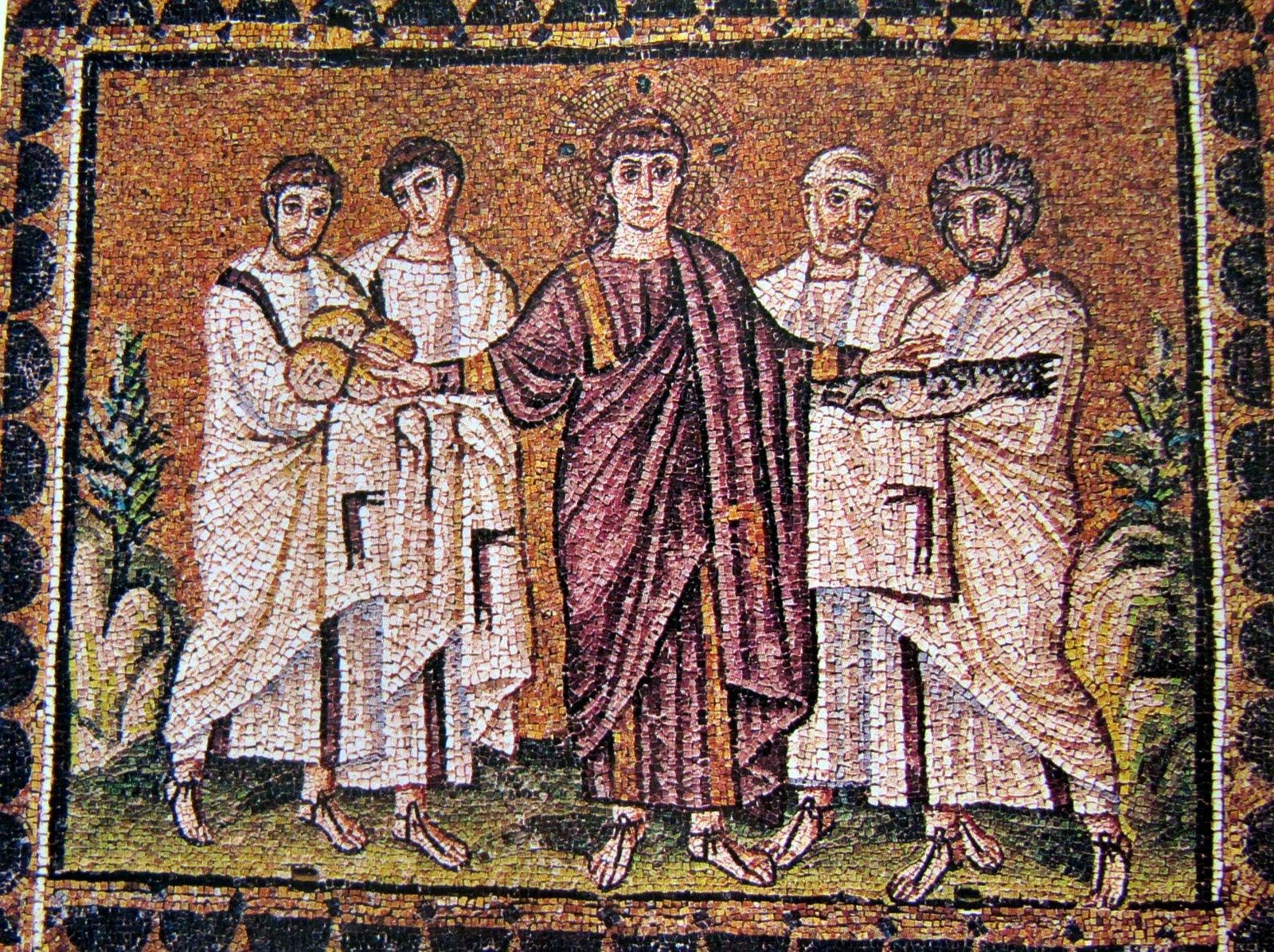 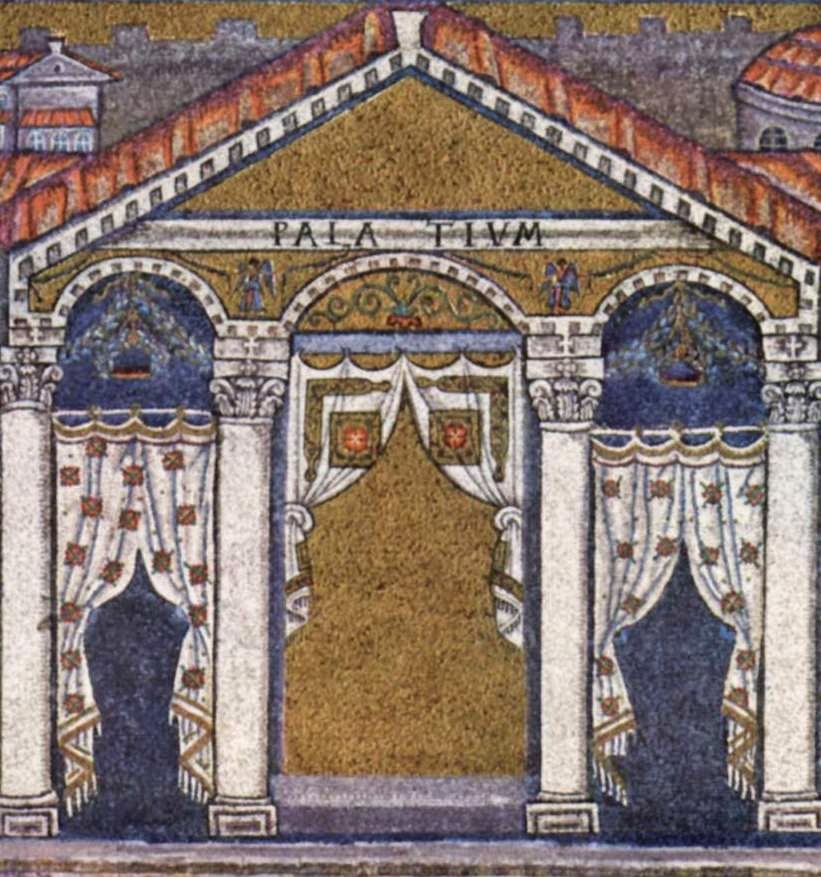