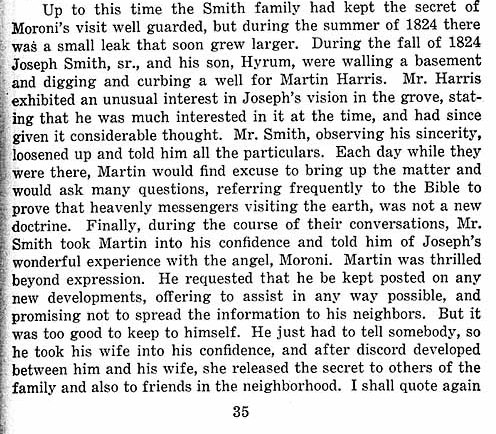 Since this account was published over one-hundred years after the fact, the question arises: what was Willard Bean's source for documenting this discussion?

Martin Harris had been separated from the Saints for several decades until on August 30, 1870, accompanied by Elder Edward Stevenson, he arrived in Salt Lake City, Utah.  This followed Brigham Young's authorization to collect subscriptions for bringing Harris to Utah, and the Saints' furnishing sufficient means for the trip.  Harris stayed in Salt Lake City for a little over a month, until after bearing "powerful testimony" in the Tabernacle, he made his way up to Smithfield, Utah, where he moved in with his son, Martin Harris, Jr.  In the late Fall of 1874, the family relocated to Clarkston, Utah, where Harris spent the remainder of his life until his passing on July 10, 1875.3  Prior to relocating from Smithfield to Clarkston, Martin Harris, Jr. hired a teenage boy named William Pilkington, Jr., whose family had recently immigrated from England, to work for and live with the Harris' family for one year.  Pilkington would actually spend the next eighteen months with the Harris family and about ten months with Martin Harris prior to the Book of Mormon witness' death.4

While spending this time with the Harris family, Pilkington later reminisced that "it became my good fortune to behold and have the privilege of conversing with this man who had been favored of God..."  He also reported that he "took great pleasure in listening to him relate the part he took in the early rise of the Church, how he stood in the presence of the angel of the Lord, and after the angel ascended into heaven, he saw the heavens open and heard the voice of God declare that everything was correct that the angel had told them and that the Book of Mormon was translated correctly."5  Pilkington was also with Martin Harris and physically held up Harris' right arm, when he bore his final testimony to the truthfulness of Joseph Smith the Prophet and the Book of Mormon, before passing away.6

Rhett James, author and playwright of The Man Who Knew: Dramatic Biography on Martin Harris, quoted from Pilkington's autobiography: "Martin first became in touch with the Smith's in the (fall) of 1824 while Joseph Smith, Sr. and his son Hyrum were digging and curbing a well and cistern at the Harris home, a mile and half north of Palmyra. Martin questioned him relative to Joseph's Vision in the woods (1820) intimating that it had a familiar Biblical ring with it, and that he was inclined to accept it..."  According to James, this information came from an interview with Martin Harris, Jr. about his father, from "Bean to Pilkington."7  It has been noted elsewhere that William Pilkington, Jr. and Willard Bean had corresponded,8 however, I would suggest that it was probably Pilkington who communicated this account to Bean, based upon his history and relationship with the Harris family. It seems reasonable that William Pilkington, Jr. learned of the 1824 account directly from Martin Harris, Jr., and subsequently communicated this information to Willard Bean, who included it in his publication on the history of Palmyra and the beginnings of Mormonism.