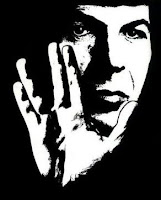 I Am Not Spock1

Leonard Nimoy's famous hand gesture is widely recognized from Star Trek as the Vulcan salute.  Where Nimoy came up with this gesture, however, is far more interesting than any fictional significance attached to the sign.  He has reported that the inspiration for this gesture was based on an observation he made when he was about eight years old.  While attending an orthodox synagogue with his father:

A group of men at this particular synagogue, the kohen, members of a priestly tribe, stood up in front of the congregation to bless everyone....They were very loud, ecstatic, almost like at a revival meeting, and they were shouting this prayer in Hebrew, 'May the Lord bless and keep you...' but I have no idea at the time what they were saying.  My father said 'Don't look' and everybody's got their heads covered with their prayer shawls or their hands over their eyes.  And I see these guys with their heads covered with their shawls but out from underneath they have their hands up....It's the shape of the letter Shin in Hebrew, which is the first letter in the word Shaddai, a word for God, and shalom, the word for peace.2

Leonard saw the sign and adapted it for Vulcan use many years later.  Rabbi Yonassan Gershom actually devoted a chapter in his book on Jewish themes in Star Trek to this subject.3  He provides additional background regarding this sign.

The Vulcan greeting is based upon a blessing gesture used by the kohanim (koe-hah-NEEM) during the worship service. The kohanim are the genealogical descendants of the Jewish priests who served in the Jerusalem Temple. Modern Jews no longer have priests leading services as in ancient times, nor do we have animal sacrifices anymore....The sacrificial system ended with the destruction of the Temple by the Romans in the year 70. C.E. However, a remnant of the Temple service lives on in the "kohane blessing" ritual (duchenen in Yiddish) that is performed on certain holy days.4

The actual blessing is done with both arms held horizontally in front, at shoulder level, with hands touching, to form the Hebrew letter "shin." This stands for the Hebrew word for "Shaddai", meaning "Almighty [God]." Nimoy modified this gesture into one hand held upright, making it more like a salute. So, technically, the Vulcan greeting is not the same thing as the ceremonial Jewish blessing. Still, the resemblance is close enough to evoke instant recognition among knowledgeable Jews.

During the synagogue service, the worshippers are not supposed to look at the kohanim while the blessing is being given. The reason for this is to focus our attention on the words of the prayer itself, rather than on the personalities of the kohanim. The kohanim are merely the channels, not the source, of the blessing, which comes from God.5

The Hebrew letter shin is provided as follows:

A rabbi and kohen from the 18th century had this symbol included on his tombstone in Germany. 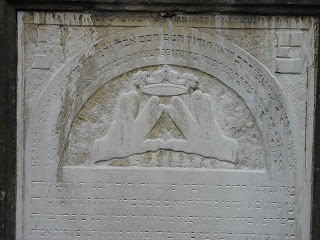 
Nimoy's adaptation of the priestly symbol is described as a hand gesture "consisting of a raised hand, palm forward with the fingers parted between the middle and ring finger, and the thumb extended."7  In an interview, Leonard made it clear regarding the thumb being extended: "No, no, the thumb goes out.  You have to get it right."8


Lorne Rozovsky has noted that, "of all the Jewish hand signs, the most famous is that of the priestly blessing, the Birchat Kohanim, and yet it is rarely seen. This is the sign of both hands outstretched at shoulder height under a tallit [shawl], with the fingers spread apart, as the Kohen blesses the congregation. The Kohen's face is covered. The hands in the position of the priestly blessing are often seen as decoration on jewelry or on the tombstone of a Kohen."9


Ronald Eisenberg has noted that "after the destruction of the Second Temple, the Birkat Kohanim became the last significant remnant of the priestly cult."  He describes this practice in similar verbiage as noted above:

"...the Kohanim prepare themselves by removing their shoes and washing their hands (as before participating in the Temple service) with the assistance of the Levites.  Standing before the ark and facing the congregation and with their tallitot covering their faces, the Kohanim repeat the Priestly Blessing in a haunting and mysterious tone, word for word after the prayer leader.  While chanting the Priestly Blessing, the Kohanim stretch both arms out at shoulder height with their hands touching at the thumbs and their palms forward....This custom appears to derive from a commentary on the verse [Song of Solomon 2:9].  The Rabbis considered this to be an allusion to the Kohen as he blessed the people..."10

Eisenberg also notes that the Kohen could be disqualified from offering the priestly blessing for idolatry, forbidden sexual intercourse, murder, intoxication, or inability due to physical deformation or problems in articulating the words properly.11

So why include this information here?

The symbol allegedly dates to the Jersualem Temple period, performed by temple servants who followed similar moral guidelines as we do as Latter-day Saints, and performed some similar rites as we do.  Primarily, I see what appears to be the form of the compass and the square in this hand gesture which was used in blessing Israel by a priest representing the Lord (Numbers 6:22-27).

I think there is room for further research on this interesting topic.

__________________________
1 Leonard Nimoy, I Am Not Spock (Cutchogue, NY: Buccaneer Books, 1997), cover
2 Geoff Boucher, "Leonard Nimoy: 'Star Trek' fans can be scary," in Hero Complex of the Los Angeles Times, May 11, 2009; available online at: http://herocomplex.latimes.com/2009/05/11/leonard-nimoy-star-trek-fans-can-be-scary/
3 Rabbi Yonassan Gershom, Jewish Themes in Star Trek: Where no Rabbi has gone before! (Lulu Press, Inc., 2009), Chapter 4
4 Ibid;  Text available online at http://www.pinenet.com/~rooster/v-salute.html; September 30, 2011 (emphasis in original)
5 Ibid
6 Grave of Rabbi Meschullam Kohn at Wiki Commons: http://en.wikipedia.org/wiki/File:Grave_Rabbi_Meschullam_Kohn.jpg; September 30, 2011
7 "Vulcan Salute" at Wiki: http://en.wikipedia.org/wiki/Vulcan_salute; September 30, 2011
8 "Leonard Nimoy: 'Star Trek' fans can be scary"
9 Lorne Rozovsky, "Hand Signs of the Jew;" http://www.virtualjerusalem.com/judaism.php?Itemid=4115; September 29, 2011.  I was reluctant to post an article on a subject that may be considered sensitive in nature; however, as Rozovsky has stated: "We should also note that the prohibition against peeking only applies during the actual blessing ritual.  The gesture itself is nothing secret.  You can see it openly displayed in books and on amulets, jewelry, wall decorations, and gravestones.  Contrary to urban legend, Nimoy was not violating any Jewish taboos by using this gesture on Star Trek, especially since he modified it from the original version.  I, for one, think it's absolutely wonderful that something so authentically Jewish has become universally recognized as a greeting of peace."  Ibid  Based on this information, and the usage of published materials, I hope that this article does not present any offense to those of the Jewish faith.
10 Ronald Eisenberg, The JPS Guide to Jewish Traditions (Philadelphia: Jewish Publication Society of America, 2004), 433-434
11 Ibid, 434
Posted by Tim