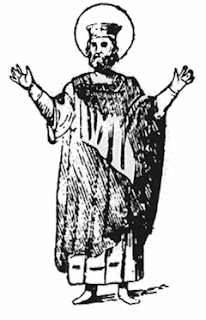 "Melchizedek arrayed in his royal robes"1


For those unacquainted with Margaret Barker and her contributions to Biblical studies (primarily on the Jerusalem Temple and Christian liturgy), a brief biography and curriculum vitae is provided.  Margaret Barker is a British scholar who studied theology at the University of Cambridge, a former President of the Society for Old Testament Study, a Research Fellow of the University of Wales, awarded "Doctor of Divinity" in 2008 by the Archbishop of Canterbury, a Methodist preacher, and author of 14 books and numerous papers.  She is known for developing an approach for studying ancient Christianity known as "Temple Theology."2  Her books include the following titles: The Older Testament, The Lost Prophet, The Gate of Heaven, The Great Angel, On Earth as it is in Heaven, The Risen Lord, Commentary on Isaiah, The Revelation of Jesus Christ, The Great High Priest, Temple Theology, An Extraordinary Gathering of Angels, The Hidden Tradition of the Kingdom, Temple Themes in Christian Worship, Christmas: the Original Story, and Creation: A Biblical Vision for the Environment.

Ms. Barker's writings strikes a familiar chord in tune with many doctrines and teachings of LDS theology.  A FARMS publication even takes note that her studies have provided significant contributions for Mormon studies.3  A number of her books have been reviewed postively in the FARMS Review of Books, and other LDS scholars, including John Welch, Bill Hamblin, and Kevin Christensen have also identified subjects where she has been particularly insightful, or acknowledged that her writings are reminiscent of Mormon perspectives.4  She was also invited to speak at a BYU devotional some years ago.5  Bill Hamblin recorded his interview with Margaret Barker in Oxford, in August 2008 and posted these videos on YouTube.6  She has also contributed a chapter, with Kevin Christensen, on "Seeking the Face of the Lord: Joseph Smith and the First Temple Tradition," in Terryl Givens' book, Joseph Smith, Jr.: Reappraisals After Two Centuries.7  Her perspectives have caused a bit of a stir amongst other Christians where traditional or orthodox viewpionts have been challenged.8  In short, her research obliges a fundamental reconsideration of Christian thought with respect to the temple, deity, and other important doctrines, many of which are closely aligned with the Latter-day Saint perspective.


Margaret Barker also founded the Temple Studies Group, which sponsors symposia once or twice a year on temple themes in the Bible and ancient texts.  In November 2008, the subject of symposia was "Melchizedek in Scripture, Tradition and Liturgy."  Barker's paper was entitled, "Who was Melchizedek and who was his God?"9  Her paper is the subject of study of this post.  Rather than limiting yourself to this posting, however, I recommend a reading of her entire paper - here.

"Who was Melchizedek and who was his God?"

Margaret Barker notes that Paul's epistle to the Hebrews "assumes a fairly sophisticated knowledge of temple tradition," and explains that Melchizedek is "introduced without any explanation into a temple text" (pg 1).  Following this premise, she explains that the Melchizedek Priesthood is eternal, that is a higher priesthood than the Aaronic or Levitical priesthood, that the prophets held this priesthood, that it is essential in the temple, and serves in the holy of holies to make one born as a son of God, or a Melchizedek Priest.  She discusses many other things in connection with these subjects, and as such, I've provided a survey of quotations from her symposium talk without commentary.  In a few places I've added references for consideration; however, the endowed Latter-day Saint will notice some striking correlations to our own temple theology, and discussion regarding the Melchizedek Priesthood.
While her paper inclued other subjects, I've tried to limit the quotations primarily to Melchizedek or the Melchizedek priesthood with few exceptions.  In her paper, she also discusses Christ vs. Satan as the firstborn (pg 7), Melchizedek's God as being the "Most High God," rather than Yahweh (Jehovah) (pg 8), and Christ as Yahweh (pg 9).  Not everything she concludes on is in accordance with Mormon theology, for example, she ends her study by identifying Melchizedek and Christ as the same person.  Considering that she does not have the restored gospel, with knowledge of Joseph Smith's teachings,  and Alma 13 and JST Genesis 14, it is interesting to see New and Old Testament scholarship outside of Mormonism beginning to arrive at some of the same conclusions regarding doctrines, principles, and ordinances, as contained within the Church of Jesus Christ of Latter-day Saints, which has been restored through the Prophet Joseph Smith, and taught and practiced for over 180 years.