The revelation itself compared to other revelations from its era

One major indicator of Section 132, apart from other revelations of its milestone for Joseph, is receiving by revelation his salvation assured. Verse 49 reads:

For I am the Lord thy God, and will be with thee even unto the end of the world, and through all eternity; for verily I seal upon you your exaltation, and prepare a throne for you in the kingdom of my Father, with Abraham your father.

One of the great realities of Joseph the Prophet in the revelations is that Joseph doesn’t get painted as infallible; in fact, several times the Lord rebukes and decreases Joseph into humility. It is ironic that if Joseph was a false Prophet, he would think twice before proclaiming such revealing and seemingly personal chastisements to himself from the Lord. A brief history of these railings is in order:


Thus if Section 132 was given long before 1843, standing on the grounds that the language correlates to it being received long before, being tied to Old Testament queries during the New Translation, it still couldn’t have been any earlier than the May 6, 1833 revelation above. We're told that upon presenting the revelation to Emma in 1843, some talk of burning it didn’t worry Joseph, as he knew the revelation so perfectly it could have been re-written anyways. After so many revelations of the Lord and a particular one that he then knew he was sealed up unto eternal life was grounds for knowing it so perfectly. We also know it took place in Kirtland Ohio which is where the majority of the Translation of the Bible happened. Benjamin F. Johnson, a close friend and to whom Section 131 was personally given, shared in a personal memoir in 1903

[Y]ears ago in Kirtland the Lord had revealed to him the ancient order of plural marriage, and the necessity of its practice…
[Joseph] waited until an angel with drawn sword stood before him and declared that if he longer delayed fulfilling, that he would slay him.2


Using the topical guide for reference to plural wives from the LDS edition of the Bible, I’ll summarize major scriptures in the Old Testament dealing with plural marriage and then place a timeframe of when these sections were reviewed by the Prophet and his scribes.


From a time-sequence table published in 2004 by Brigham Young University in the opus work “Joseph Smith’s New Translation of the Bible,” we find that translation of the Old Testament occurred in two segments, the first beginning in June 1830 with what Latter-day Saints may refer to as the Book of Moses and through the end of Genesis 24:41 by March 7, 1831. Translation was then focused on the New Testament and the Old Testament was picked back up in July 1832, and was deemed complete July 7, 1833 at the close of the manuscripts.3 According to the Joseph Smith Translation timeline, Joseph would have only seen one passage from the above list of polygamy-type scriptural references in 1831, the bulk of them between July 1832 to July 1833.


The current LDS edition heading of D&C 132 places a date of July 12, 1843 as the day this section was recorded, but qualifies from “historical records that the doctrines and principles involved in this revelation had been known by the Prophet since 1831.” Because the “historical records” were never fully accessible to the Church of Jesus Christ of Latter-day Saints up until recently, this has been a standard timeframe to actually date the time when Joseph Smith was aware of plural marriage as a doctrine in part of the restoration of all things. We are aided greatly by historian B.H. Roberts for devoting several pages to this single topic in the introduction of Volume 5 of the History of the Church.


There is indisputable evidence that the revelation making known this marriage law was given to the Prophet as early as 1831. In that year, and thence intermittently up to 1833, the Prophet was engaged in a revision of the English Bible text under the inspiration of God, Sidney Rigdon in the main, acting as scribe.4

Our historian doesn’t state 1831 as precisely as our header author indicates, however “as early as 1831” repeats itself many more times during this introductive study to Volume 5. Other than the concept of 1831 being the time that the translation of the Bible began, additional evidence is included from the minutes of a prayer meeting of the Reorganized Church, on September 12, 1878, nearly 50 years later, attended by Elder Orson Pratt, during a tour of the Eastern Mission with Elder Joseph F. Smith. Elder Orson Pratt:

…gave a plain, simple narration of his early experience in the Church, relating many interesting incidents connected with its rise…He explained the circumstances connected with the coming forth of the revelation on plural marriage. Refuted the statement and belief of those present that Brigham Young was the author of that revelation; showed that Joseph Smith the Prophet had not only commenced the practice himself, and taught it to others, before President Young and the Twelve had returned from their mission in Europe, in 1841, but that Joseph actually received revelations upon that principle as early as 1831. Said ‘Lyman Johnson, who was very familiar with Joseph at this early date, Joseph living at his father's house, and who was also very intimate with me, we having traveled on several missions together, told me himself that Joseph had made known to him as early as 1831, that plural marriage was a correct principle. Joseph declared to Lyman that God had revealed it to him, but that the time had not come to teach or practice it in the Church, but that the time would come.’5

Lyman Johnson and Orson Pratt were members of the first Quorum of the Twelve Apostles in 1835, and served at least one mission together as revealed on January 25, 1832. Lyman eventually apostatized in 1837, was reinstated, and then permanently excommunicated after another apostasy in 1838. This testimony, decades later, lists “as early as” twice, showing no precision in actual time or even year. I believe the evidence presented doesn’t change the translation of the Bible concept of dating Section 132, only refines it.

This chart shows the impact translating the Bible had on revelation 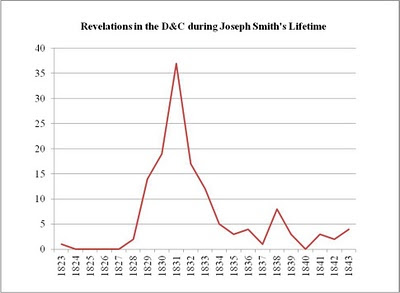 This chart shows the impact translating the Bible had on revelation.6