Nibley on Rhetoric and Pseudo Scholarship 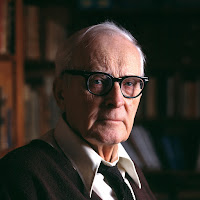 Providing some harsh critique of certain conditions existing at BYU in the mid-20th century, Nibley wrote, "It is not the religious views of our professors that drive so many young people from the Church--few are fooled or impressed by the religious contributions of our English or Philosophy Departments, for example--it is the claim to a higher and deeper learning, a knowledge of things that others do not know; that is the weapon. It is the power to impress and beguile others by appealing to a learning that the "layman" does not possess that puts him at the mercy of the professors."

For the past year I have been trying to learn and teach something called classical rhetoric. Rhetoric was "the art of the Sophists," and the ancient, medieval, and modern universities have all been under their spell. Plato warned against these people and prophesied that they would (as they soon did) gain complete control of education; in his dialogues he has Socrates draw from the great Sophists their admission that what they really seek is not knowledge but the prestige and influence that go with it and that the aim of their art is only to get enough learning to make an impression on the public and thereby get "power and gain."

From the beginning the Sophists devoted most of their energies to attacking religion. The professional humanist simply cannot leave religion alone, for in the end he has nothing else to talk about. The philosophers can always get an audience by promising an attack on the Church, but whoever listens to them or reads their stuff when they talk about anything else? They don't dare apostatize, because if they did the public would lose all interest in them. To attack religion is the one safe course for the ambitious intellectual. A professional savant is expected to say something significant--it is not enough for him simply to repeat what others are saying. And so he strikes out in bold new directions by attacking prevailing religious beliefs. Of course in doing so he falls back on platitudes and truisms and arguments as old as the race..., but since he is in the minority, this marks him as a great thinker and above all saves him from being called to account; for if he is too closely questioned or criticized, he can always play the martyred liberal.