2 Nephi 5 and the Makings of Civilization


I have always thought that 2 Nephi 5 has been one of the most interesting chapters in the Book of Mormon, not because of its religious and spiritual insights, but because so much information relating to Nephite civilization is condensed into such brevity.  After discussing Laman and Lemuel's spite towards Nephi, he relates the following information:
Read more »
Posted by Tim No comments: Links to this post

The First Vision in the Formative Years of the Church 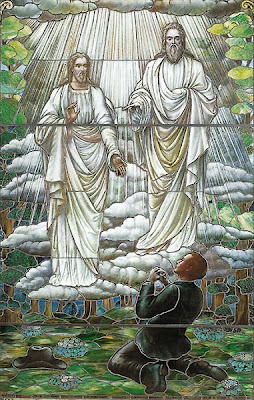 In studying the restoration of the Gospel of Jesus Christ the significance of Joseph Smith's "First Vision" can hardly be overstated.  Initially, however, the importance of this event appears to have been less appreciated for its profound significance and relevance.  Terryl Givens has noted that the "timing and the naming of the event assign it absolute primacy in the founding of Mormonism, [yet] the vision was described by the young Joseph and apparently interpreted by him at the time as a private experience with no greater implications for the world at large or for Christian believers generally."1  After all, while Joseph was forgiven of his sins and instructed to remain detached from all of the existing churches, the Lord promised that at some future time the fullness of the gospel would be made known to him.  When Moroni visited him three years later he learned that the time was nigh for the gospel to be preached to the world, preparatory to the second coming of the Messiah, and that he would be instrumental in translating a record containing the fullness of the everlasting gospel.  Accordingly, the angelic ministration of Moroni seems to have been initially understood as the catalyst for providing Joseph with a course of direction and a specific commission, rather than his sacred experience in the grove.2  It was only with hindsight that the importance of the First Vision began to take its rightful place in restorational theology.  For example, Joseph didn't publish an account of the vision until 1842, two years before his martyrdom; however, this sacred experience was documented and shared in a number of instances prior to this time.